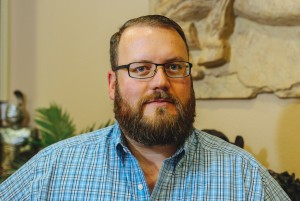 Previously, Dello Russo served as Director of Operations over Autoworx, House of Hotrods and Marksmen Firearms. He led the planning and opening of Marksmen’s second location in Killeen on October 1st and is executing the opening of a third gun store in Benbrook in February of 2017.

“We are experiencing explosive growth in our retail segments and Joey has proven through his work ethic, loyalty, high execution and dedication to be the person to help lead each of these companies forward to a bright future,” said John Geyerman, Vice President of Operations.

Dello Russo has a graphic design degree from the Art Institute of Dallas. His early career includes art director and production management roles for publications across Dallas-Fort Worth. He transitioned to sales and marketing for small business, helping set standards for branding, design and digital transitions.

He was hired by AngMar in 2008 to do graphic and web design.

“Our company owners took a chance on me when I came to AngMar eight years ago,” Dello Russo said. “I took the approach of doing my job every day in a way that would show them they were right to take that chance. In return, they’ve fostered an environment that nurtures and rewards hard work, allowing me to continue to elevate my career within a dynamic, profitable and thriving company.”

Geyerman added, “The trajectory of Joey’s career is a testament to his talent and his innate understanding of the type of commitment it takes to elevate a business to the next level. He exemplifies everything we look for in our leadership team members.”