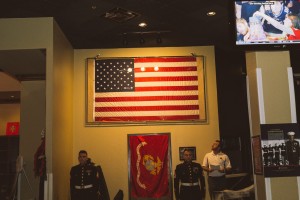 October 26, 2016 (Mansfield, TX)– Friday, October 28th, Fat Daddy’s Sports & Spirits has the rare privilege of making a connection with a great piece of American history, and at the same time honoring a local group with whom we have a longstanding

partnership. The Mansfield Area Marines (MAM) have been honored with a flag that flew over the Iwo Jima Marine War Memorial in Arlington, Virginia on August 1, 2016.

The American Flag from August 1st, and the certificate that accompany it, were presented to the Mansfield Area Marines along with a letter from Marine Corps Headquarters thanking the MAM and presenting the flag, “in honor of your years of dedicated and faithful service to the United States Marine Corps.”

“The Mansfield Area Marines are both humbled and honored to be recognized with such a meaningful tribute,” says Thomas Mendonca, one of the four founding members of the MAM. “But we recognize the true glory of this honor. We dedicate this flag to all Marines currently deployed who unselfishly defend our freedom. And we dedicate it to the memory of those in the Navy who guarded our inland seas and ocean coasts and fell in defense of the flag.”

The MAM has a long standing partnership with Fat Daddy’s. Fat Daddy’s is known within the MAM as its “Tun Tavern,” a reference to the 1700’s tavern where the USMC was founded. The MAM’s local Tun Tavern is a gathering spot for meetings, banquets, celebrations and more solemn occasions. Fat Daddy’s supports the MAM as a title sponsor in its charity golf tournaments each year at Southern Oaks Golf Club, raising money for fallen Marine families, local charities and other organizations supported by the MAM. In addition, Fat Daddy’s provides meeting space and entertainment.

“Our partnership with the Mansfield Area Marines is meaningful in so many ways,” says Wendell Rahn, Fat Daddy’s General Manager. “It’s an honor to serve and support them as a group. But in getting to know the members individually, we are incredibly inspired by these heroes who have sacrificed so much for our country and our freedom.”

The flag dedication ceremony takes place Friday, October 28th at 6pm at Fat Daddy’s, 781 W. Debbie Lane in Mansfield. The flag measures 5′ x 9′ and will hang next to the stage that hosts live performances, and commands a visual focal point for Fat Daddy’s large live music enthusiasts, as well as the more diverse and family-oriented brunch, lunch and dinner crowds. Craftsmen at Mansfield’s House of Hotrods, an AngMar Retail Group property, constructed the oversized custom frame that will permanently display the flag.